In the DFG priority programme DiSPBiotech (SPP 1934), engineers and scientists have set themselves the task of investigating the dispersity-, structural- and phase-changes of proteins and biological agglomerates in biotechnological processes. The yield in a biotechnological production, especially of high-molecular complex biomolecules, depends in particular on the mechanical, thermal and material stresses caused by the process environment. The examination of these stresses is to be carried out on three scales. At the molecular level, the tertiary structures of proteins can be altered and their functionality can be impaired. However, damage can also be caused by the process environment at the level of protein aggregates such as Virus Like Particles (VLPs) or protein crystals. The third order of magnitude, where the influence of the process environment is very clear, is the level of cells and cell aggregates. Here the nutrient supply, and thus the productivity in a biotechnological process, is strongly dependent on the morphology of the cultured cell clusters. The biotechnological process chain, in which the projects of the priority programme are situated, encompasses, in addition to cultivation, the processing and formulation of a product (see figure).

In summary, innovative analytical and numerical methods for the investigation and description of biotechnological processes at the protein, bioagglomerate and process environment level are to be developed, established and used within the scope of this priority programme. This will allow a much better knowledge and prediction of the effect of mechanical, chemical and thermal interactions on the denaturation of the proteins along the process chain as well as the formation and structure of the bioagglomerates and thus the yield and quality of the products. 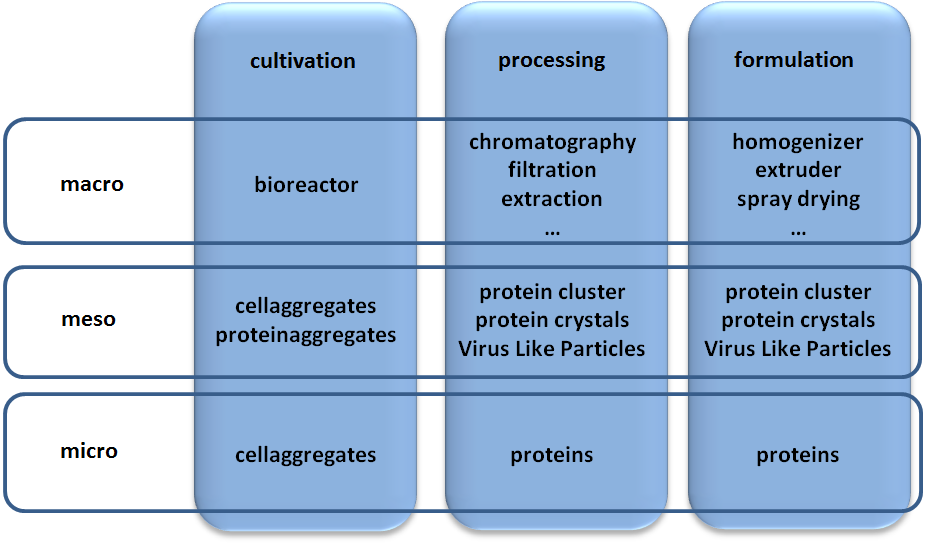